"We pride ourselves on our yard and if it weren't for Angel's Gopher Trapping, who knows what would have happened to our gopher infested property. The gophers were beginning to get completely out of control damaging our lawns, even killing our fruit trees. They have done a fine job saving our property and in a very short period of time it is back to looking gorgeous once again. We highly recommend this company. They are very knowledgeable, nice and professional". 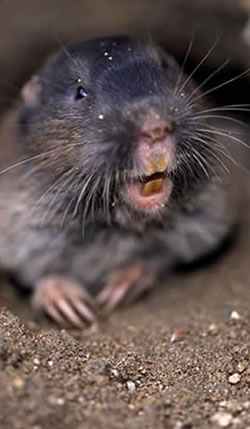 Pocket gophers are medium sized burrowing rodents ranging from 5 to nearly 10 inches long and live underground almost all the time. They are called pocket gophers because of their fur-lined cheek pouches outside of the mouth, one on each side of the face. These pouches or "pockets" are used for carrying food. They are active year round. They are powerful diggers and have front paws with large claws.

The pocket gopher digs with its claws and teeth and kicks soil, rocks and other items away from the digging area with its hind feet. Then the gopher turns over and uses its forefeet and chest to push the soil out of its burrow. Digging conditions are usually optimal year round and mounds can appear at any time. Greater activity will occur in well kept, irrigated areas with much vegetation. The poorer the habitat, the larger the burrow system required to provide sufficient food. Gophers also gnaw and damage plastic water lines and lawn sprinkler systems. Mounds on lawns interfere with mowing equipment and can ruin the aesthetics of well kept turf grass.

Burrow systems consist of a main burrow, generally 4 to 18 inches below ground and parallel to the surface, with a variable number of lateral burrows off the main burrow. These lateral burrows end at the surface with a fan-shaped soil mound or sometimes with only a soil plug. Some parts of a burrow system may be as deep as 5 or 6 feet. Deeper branches off the main burrow are used as nests and food caches. The diameter of a burrow is about 3 inches, but varies with body size. A single pocket gopher can create several mounds in a day and can construct as many as 300 soil mounds in a year while moving over 4 tons of soil within a few weeks of work. Burrows are continually changing, with old tunnels being sealed off and new ones excavated. A single gopher burrow system will be about 50 feet in diameter.

No one really knows how many linear feet of tunnels a single pocket gopher can construct in a lifetime, but it is undoubtedly in the thousands of feet. Typically, there is only one gopher per burrow system except when mating occurs and when the female is caring for her young. 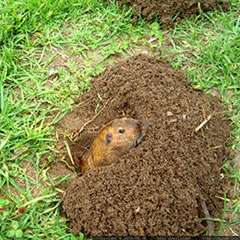 Pocket Gophers such as this one, cause major havoc and drive us MAD! But don't fear, we can help rid your lawn or hillscape of these pesky Gophers and Moles who destroy your lawns, erode your manicured landscape, eat your most prized flowers, destroy crops, kill precious trees and bushes.

Pocket gophers are ground dwelling rodents, commonly found around California. They are brownish grey in color and store food in their cheek pockets. These animals build tunnel systems that can destroy yards and gardens.

Gophers burrow underground and build elaborate tunnel systems. Their presence is usually discovered when mounds appear in the soil around gardens and lawns. They feed on fruits, vegetables, plants, roots and grubs. Gophers use their cheek pockets to transport large amounts of food back to their burrow.

Gophers are generally solitary creatures that defend their burrow systems aggressively. During breeding season, however, males and females may share the nests if their tunnel systems neighbor each other.

The best method to treat gophers is a combination of exclusion work and removal. Angel's Gopher Trapping recommends beginning a preventative pest maintenance program to prevent gophers from returning. We offer bi-monthly, quarterly and one-time services. For more information about gopher removal, please call us today.

Why You Choose Angel's Gopher Trapping


Our Mole and Gopher Control and Removal Service includes: